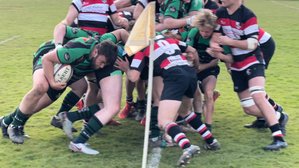 A tough, physical game at Raleigh Park ends in defeat, but a strong performance will encourage the boys

On Saturday, Withycombe hosted league leaders Pirates Amateurs to Raleigh Park in the penultimate game of the 2021/22 season.
Withy started well and enjoyed a decent amount of the possession, dealing with the big tackles well. Even when in defence, they would be making sure to tackle equally as hard as to prevent any real territorial gains. After just 11min, Withies found themselves a man down after Danny Sansom was sent to the sin bin for what was judged to be a dangerous clear out from the ruck. Withy weathered the storm well though to avoid any points during that 10-minute period.
With the visitors starting to build in strength, they began the second quarter of the game camped up inside the Withy 22’. Withy’s defence stood strong for around 5 minutes but when Pirates’ catch and drive line out was set up, they used the strength of most of the side to maul the ball over the line and score. Penalties proved to be vital for the Cornishmen as they then made use of the ‘safety’ of a penalty advantage to pass long across the field six minutes later to draw open the gap and score their second to give them a 12-point lead on 31 minutes.
With the points gap widening, Withy began some good counter play and started to recreate the level of play seen earlier in the half. With the half drawing to a close, the boys in green and black earned themselves their first penalty of the game on the Pirates Amateurs 5m line and opted for the scrum – a set piece that had been working well throughout the half. However, with the scrum being reset three times, the clock turned into the red and the half was ended with the boys feeling frustrated having been so close to scoring.

The absence of that score was made even more frustrating immediately from kick off in the second half. With Pirates winning their own kick, they made their way downfield and scored their third try.
Withy struck back though and resumed the impressive level of play they had shown against a side who had secured promotion last week. So much so as with play back up in the visitor’s 22’, a Withy catch and drive was well executed in similar fashion to Pirates’ earlier in the game. With the maul inches from the whitewash, George Doughty launched forward to score in the corner.
With the game being played at such a high tempo, and now playing uphill, Withy began to tire a little and left patches of the field exposed, leading to two quick tries from Pirates Amateurs and a score line which now didn’t fully reflect the level of effort put in by the boys.
Withycombe hadn’t finished though as with the hour mark approaching, two quick penalties for Withy in the opposing 22’ gave them a great opportunity and with the second of those penalties taken quickly, the play entered the 5m channel. Pirates attempted to strip the ball in the tackle, but it wasn’t won cleanly and with the ball landing in the hands of Mike Richards, he scored under the posts. Tom Cooke’s conversion topped up the points and improved the score line to 12-31.
Although there were no further points scored in the game, the action continued to provide plenty of entertainment and great rugby for the supporters to enjoy. Full time Withycombe 12, Pirates Amateurs 31.

A tough encounter this week, but one in which the boys did well in. This isn’t to say there weren’t a few points left behind on the field today, but this can all be taken into training in preparation for the final game of the season in a fortnight where we welcome Bude to Raleigh Park. We’re hoping to see you all there and pack the park to finish off the season on a high! Kick off on the 23rd April will be at 2:30pm.