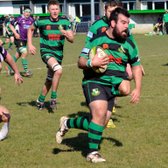 Rare Win at Hayle for Withy

Wins at Hayle have been rarer than the proverbial rocking horse droppings in recent years for Withycombe, but despite huge problems with player availability, eighteen of the Green & Black's best fought their way to a win in hostile circumstances!

The visitors were on the back foot at the start after the advertised 3pm kickoff was brought forward by half an hour, leaving minimal time for preparation, although Withy acquitted themselves well in the opening exchanges given the upheaval. Hayle missed an early penalty but took a 3-0 lead on 16 minutes after Sam Manning was sin binned for tackling the man without the ball. The hosts followed that up with a catch-and-drive try on 25 minutes to go 8-0 up but Withycombe were just about getting the car trip out of their legs.

Some quick phase play found Liam Cullen outflanking the Hayle defence on the home 22 and waltzed in, his combination of pace and deceptive hips beating everyone on his way to the line. Dave Richards, playing in his second position of fly-half, slotted the conversion. Despite Withycombe's struggle to win lineout ball, they remained on top for the remainder of the half but lacked a finishing edge. With Hayle better adapting to the refereeing of the breakdown and a few scraps breaking out, the visitors did well to keep their heads. Joe Parkin's opportunistic quick tap try on the stroke of half time put Withycombe in front for the first time, with Richards the younger again slotting a difficult conversion.

The break seemed to galvanise the home side as they came out all guns blazing, pulling back three points within five minutes and taking the lead with twenty minutes to go with a well-taken try. The introduction of Glenn Channing had the desired effect though, as Withycombe found their groove again and Channing himself went over for the decisive score with two minutes to spare. Next week Withycombe host basement boys South Molton at Raleigh Park before their Easter Saturday trip to Bromley to decide the South of England representatives for the Senior Vase Final.