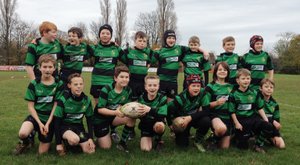 Withy U12s bounced back after the previous weeks mauling in the mud. The game started with the visitors exerting some early pressure that was well defended. Both sides then had an equal measure of possession with good rugby being played from the breakdown and out wide. Withycombe slowly edged up the pitch and this was rewarded by a hard fought Jayden Gore try after good rucking on the Teign line just before half time.

The second half began with Withy slowly gripping the match with slightly more edge to their play, forcing Teignouth back towards their own try line. This allowed Finn Musgrove, at scrum half, to intercept well and crash over with try number 2.

Good recycled ball then began to emerge and go out wide out through various hands as Withy attacked. One such move saw Ben Wilkinson pick up a final pass to storm in from some distance, out running the defence to land a third try in the left corner.

Continued Withy pressure now had Teignmouth well and truly rattled and a defensive kick from their own try line was eagerly snaffled up by a waiting Tom Humphrey, loitering with intent at full back to scream in the forth and final try of the day.

A great game of well played rugby from both teams, with good individual performances throughout. A far more accomplished team effort than the previous week. It was good to see the boys put together a solid workman like performance against tough and uncompromising opposition. At the end everyone knew they'd been in some game.

Man of the match: Ben Wilkinson for good running with the ball in hand