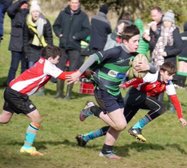 Withycombe U12s welcomed their North Devon rivals to Bicton on Sunday for the first clash between the two sides. And as always Barnstaple came with a certain aura of being a very good side. It would however prove to be a landmark day for the young Withies.

Both sides looked highly motivated as they took the field for first period, Withycombe shrugged off their usual slow start and were straight in to every ruck and looked strong at every break down. With each pass sticking Withycombe were looking to find space, and it eventually came after ten minutes with a strong burst through the centres and a deft off load to dot down. This proved to be the only score of the first period as the defences were on top.

The following two periods followed the same route with defence the key. This was not exclusive however as Barnstaple scored two unanswered tries. Things on the pitch were starting to get a bit fractious with some high tackles and hand offs to the face becoming more and more regular from the visitors. It was to prove a seminal moment though as the Withies decided to keep their cool and become physical themselves, and this seemed to really rattle the Barnstaple youngsters who were not used to being pushed around on a rugby field.

And so to the final period and what a fifteen minutes it was. All the young Withies really stood up to be counted as a strong unit.

Withycombe edged in front with minutes to go only to immediately cough up an equalising try to Barnstaple. The young Withies then had a sustained period of pressure and control as the ball was constantly kept alive in the contact area. Withycombe played phase after phase waiting for the right chance to strike, that came with minutes left to go. Slick hands and good lines saw the ball worked out wide for the game winning score. Barnstaple kept coming and in the last seconds looked to have equalised, this was chalked off however due to the game being bought back for foul and dangerous play.

This bought the final whistle to the delight of the Withy youngsters. A real test had not only been taken but passed during this game, and the rest of the season can be looked forward to favourably.

Sent from my iPhone

To be played at Bicton