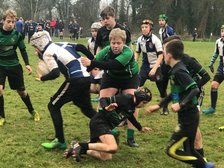 One for the mums on Mother’s Day

Mother’s day saw Bridport the visitors to Withycombe for a game that has traditionally been a very close fought encounters. This one would be slightly differernt as the young Withies served up a real treat for their mums and indeed all supporters.

Straight from the first kick off the young Withies were on the front foot showing a determination at the breakdown that has been seen to few times this season. This would set the tone for the whole game, with Bridport struggling to contain the power of the Withycombe ruck and maul. Throughout the game this lead to numerous turnovers in possession whilst not losing one of their own rucks.

Tries came at regular and frequent intervals during the first two of the three periods, with the scores being evenly spread around the team. The forwards were certainly getting their rewards as they were quicker to react to loose balls at breakdowns and on several occasions this was rewarded by quick pick ups and drives over the line.

The biggest delight for all watching, especially the coaches, came from the vastly improved passing and handling. Something that has been worked on in training recently. Crisp passing and a willingness to offload and look for a pass saw the young Withies time and again with plenty of space in front of them in which to run.

This resulted in what was, but for a
forward last pass, a try of the season contender that would grace any game at any level. The ball going the width of the field twice within just six passes.

In the third period the Bridport team continued to push forward and duly got their rewards as they
crossed the whitewash on three occasions, one of these by our own Cody Bate who was guesting for Bridport.

Overall a fabulous performance from every single Withy who all really stepped up today.

Special thanks today go to Cody, Bailey, Brendan, Charlie, Scott and Kieran all of whom were prepared to play for Bridport against their own teammates. Never an easy thing to do.