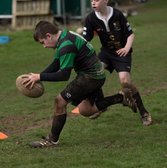 Players lent to ensure a game

Withycombe’s U12s entertained a South Molton last week for a tough and physical encounter of a different kind. With the visitors seriously depleted by illness during the week they traveled with just four players, with the Withycombe boys gamely opting to guest for them rather than not play a match.

From the very start the difference in styles between the two clubs was obvious, Withycombe looking to go wide and run. Whilst the South Molton players happy to give it to the big lads to go direct. This slowly but surely changed as the influence of those Withy boys in South Molton shirts put their stamp on things and looked to pass the ball and off load.

It turned out to be a very even encounter with neither side having absolute dominance in any area of the game. Although the kicking of Lewis Tose was a constant thorn in the South Molton side.

Scores were traded at regular intervals, and whilst it was a physical game it was ultimately a fair and even one, thanks in part to Joe Blyth who refereed proceedings very well.

At the end of proceedings, and with no scores being kept, all coaches decided to call the game a well deserved draw. Man of the Match went to all for playing in the true spirit of the game and ensuring the South Molton players trip was not for nothing. And special congratulations to Ollie Allars on his first Withycombe try.