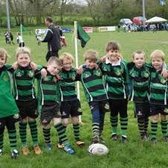 Tough day at the office sees Withycome team stand up and be counted!!!

Sunday the 18th October saw the Withycombe RFC take on the Exeter Chiefs at Sandy Park (Now there’s a possible headline of the future!!?).

In what was to turned out to be a tough day at the office for the Withies, this was none the less and eagerly anticipated fixture.

A strong Withies side turned out and after two very tough games, against strong opposition, can be very proud of themselves. With expert guidance and encouragement from coach Warren and coach Neil the Withies encountered some big tackling an strong running from a Chiefs side who were always going to be in challenge.

Sporting new Creeley sponsored 2015 kit, The Withies certainly looked the part. A massive thanks to Chris down for sponsoring the team Kits this year - it really makes the team come together and feel as one. And they look the business!!

Both games had a similar grain - essentially Exeter had a handful of very good players who seemed to control their play almost exclusively. The larger players were very strong runners and also good tacklers which meant that defensively their battering rams often made it through to score. In defence the Withy team had to dig deep to stop these players coming through.

There was some excellent resolve by the Withycombe team in these 2 games which ultimately ended in defeat against a team that are clearly well practiced, and clearly have some very good players. The great things about his game is that Withycombe now know what they need to be aiming for in order to compete with teams that have bigger players. It’s all about improving the tackling when in defence, and running the line in attack with supporting runs and offloads.

Well done to all who played – everyone deserves praise for the way you conducted themselves before/after and during the game!!

A couple of special mentions:

Jack – Play of the day for some sterling defence work
Evan – Man of the Match – for again some excellent effort tackling but also some great improvements in his running game.

In dispatches – Harry Walker again was outstanding in the tackle area, similarly Olle R & Ryan got stuck in as well we hear. Everyone for that matter deserves a big pat on the back.

Here’s to next week against Teignmouth….10.15 start so see you there, ready and roaring to go!