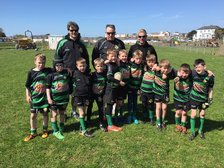 Great end to the season as Withy storm to victory......

The 2016 tour took the Green and Blacks down to the dramatic North Cornish coast to take on the Claret and Blue hoops of Bude RFC and the “Cornish All-Blacks” of Launceston RFC.

En mass, the Withy took over the entire park at Widemouth Bay caravan park with representation from all age groups from u-13 right down to under 6s – and with the weather set fair the stage was set for a great 2016 tour.

The U-9s, on the brink of completing the first year of contact, were very well represented with a touring party of 11 making the trip. This was a great number and allowed everyone to get plenty of game time to show of their skills – and this they did.

Day 1 saw Withy take on a rather large Bude side (not sure what they feed’em down there) and day 2 saw them move inland for an all out assault on the modestly named “Cornish All-Blacks” of Launceston.

I think it fair to say that this year has been a year of ups and downs for the u9 team. There was, of course, the inauspicious start to the year when Charlie Rogers suffered a double fracture to his arm during the very first training session of the year. There was a tangible dose of reality dealt out following this and highlighted all too early that we were dealing with a game that could all to easily result in serious injury. For all concerned, especially the coaching staff, the key focus from that point on was safety, fun and technique…..in that order.

Although the u9s didn’t win all (or even many) of their games this year – what cannot be denied is that there is undoubtedly a talented group of players forming who have improved immeasurably during the year. A particular example of that was the trip to Tavistock where the Tavistock coaches approached the Withy coaching team and suggested they had not seen a team move the ball as well as Withy throughout the whole season. This was proof that the boys were improving in the right way – if not running out scoring winners they were the moral winners!!

And this ethos again proved to be the case in the penultimate fixture versus Bude on Saturday – an absolutely terrific performance from the whole team. A boisterous supporting crowd urged the Withy on to a multiple score victory against a Bude team that sported some very sizeable players. Tackling was outstanding – particularly from Harry W, Charlie R, Will D and Ollie R – all of who’s tackle count exceeded the average, and the defensive line drills clearly paid off as Bude struggled to get over the game line. The passing and movement also looked excellent – Callum setting the tone with darting runs, Charlie C, Dan and Rory CS using their pace to get into space – tries being shared amongst them equally. Luke make some great ground with dinking runs and Harry G was constantly up quickly to stop their momentum also chipping in with a great dash down the line. Tom B got involved with a number of great tackles all contributing to a superb all-round performance in the sun……

This game really summed up the fantastic group of individuals that we have mustered in our U9 group – and as they go into u10 where things go up a notch again, there is surely a promising future for many of these players.

One thing that the team has struggled with this year is consistency. From the highs of a great performance at Sidmouth – where Charlie R, Ryan, Ollie R and Sam really found their feet in the team, to a difficult game against Topsham the following week. During the Topsham fixture a number of Withy coaches were looking skyward – the inferred question being “have these boys actually played this game before!”. To be fair Topsham had a vary strong side – but it highlighted that the team need to improve the consistency. What can never be questioned, however, is the team spirit…..

This team spirit carried on into the final fixture of the season against Launceston. Pre-match preparation wasn’t the best – its fair to say. The excitement of the clubhouse the previous night proving too much for some of the Withy players – but it didn’t affect their performance.

The first game saw Withy a little slow to get going – however with tit-for-tat scoring the honors were even. Again several players taking the game to the Cornish All-Blacks – both Charlies in particular along with Rory and Ollie R tackling. The second game was a further improvement with Callum and the “Rapid Dan” scoring a brace a-piece with several “7 tackle” turnovers highlighting just how far this team has come this season. And so there it ends…..on a winning note - Withy u9s marching to a resounding victory to wrap the season up.

From an inauspicious start to the season, when Charlie suffered his gall