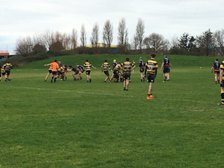 On a rare dry afternoon, Wivey Colts arrived in Weston to take on Hornets in a friendly u18s fixture.

Hornets looked up for the challenge and from an early ruck showed counter-rucking intent. The wivey lads soon mastered this and Olly Hale on numerous occasions found himself in a fantastic position to turn over good Hornets ball.

From the kick off the ball was carried midfield by Wiveys forwards, quick hands saw Wiveys left wing fly over for a great team try.

It was Wiveys turn to defend which saw each and every player stepping up to meet the tackle. A free kick was awarded to Wivey on their defensive 22, quick thinking scrum half Reece Hale, took the tap, broke through and with the winger and fullback to beat ran the length of the pitch to score a fantastic solo try. Stretching the score to 0-20.

Wivey quickly found themselves on the front foot again and the backs, with time to create, showed their class and centre Will Thorne scored a converted try.

Wivey found themselves down to 14 men when their flanker was yellow carded for interpreted foul play. The lads worked hard and defended their try line admirably. Hornets frustration allowed Wivey to clear their lines and after some good ruck ball and fantastic handling saw Will Thorne score his second, running a great support line to score under the posts. 0-34. The score ended as such but the team held out a final push from a determined Hornets side, who’s standout players were the hooker and number 8.
Special mention to the young referee who had control of the match at all times and gave consistent decisive calls throughout the match.
Also thanks to U12s coach Mark Barrington, Benji Stevens and Arnie Priest who stepped in when coach Des was shopping and drinking tea up t’North.

Next week the lads are back home with a league fixture vs Nailsea and Backwell.