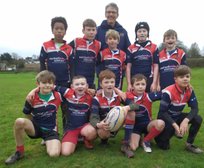 It is with great pleasure that I announce the first ever win for Wivey U11s (2019/20)
We played away at Cullompton RFC who were great hosts.

We completed 3 thirds with the support of a Cullompton player in the first and second 'third' and two players in the final third. We scored many tries in the first third with lots of individual flair and some much improved rucking and tackling. The second third was a much tougher affair with a stronger opposition. They outscored us but our structure was improved and we had some great tackling. The final third was a much closer affair which we won as a result of good support in attack and more organised defence

It must be said that the Cullompton ref was excellent and a little generous at times and if we didn't count the tries scored by the players loaned to us by Cullompton the result might have been different.