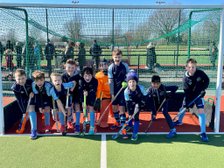 Last weekend was the Regional (Surrey) round of the England Hockey In2hockey Cup for U10 and U12 age group. Our U12 girls narrowly missed out on qualifying for the next round due to goal difference, and our U12 boys faced immense opposition from Guildford and Old Georgians. We are super proud to report that our U10 age boys and girls both qualified for the SE area Finals.

Match Report for the Boys (Dave Sampson U10 AGM)
First place: Woking HC, Second place: Guildford HC
After a slightly rushed and chaotic first match where we drew 0-0 against Dragons, the boys managed to find their groove in the next game and defeated Guildford 1-0 in a closely contested game. This victory gave the team the confidence boost they needed, and led to some excellent hockey in their final two games, resulting in a 4-0 victory against Epsom, and, although close on the scoreboard, a dominant 1-0 win over Reigate. 1 Draw, 3 wins = 10 points overall (6 goals scored with an impressive 0 goals conceded)
Many thanks to our coach Purav, and to all the parents who give up their time in support of the boys!
Well done everyone - Onwards to the next round!

Match Report for the Girls (Lottie Roberts U10 Lead Coach)
First place: Guildford HC, Second place: Woking HC
The U10 Girls had an outstanding weekend representing Woking Hockey Club at Charterhouse, hoping to get through to the South East Cup Finals - they did it!!!
It was a beautiful, sunny, yet very cold morning at Charterhouse. The girls were warming up in full force, getting ready for some competitive fixtures. Drawing vs Old Georgians in their first game, with a solid defensive lineup with Amy Harpin, Beatrice Quinn and Katherine Wardill, making some superb tackles and passes out wide to Charlotte King and Chloe King in Midfield.
Their second game was a win vs Epsom with Sasha Thompson making some outstanding runs down the field to support Lucy Rhydderch, Alice Craigen and Emmie Evans in midfield and Lucille Cumberland in attack. Alice Craigen found herself with the ball in the D, slotting it past Epsom’s defensive line and goalkeeper, scoring for Woking.
The final game, the big one.. vs Guildford, Ava Brown making her second fixture appearance in goal made some incredible games throughout the morning, especially against Guildford. Unfortunately, Guildford slipped more by us than we were able to score, resulting in a loss.
Thanks to Nick Harpin for his encouragement, continuously keeping the girls sprits high and their hockey skill level even higher.
With 1 draw, 1 win and 1 loss - that’s good enough for our girls to GET THROUGH TO THE SOUTH EAST CUP FINALS!!!!

We’re super proud of the boys and girls who represented Woking Hockey Club and wish them all the best for the SE area finals in the next few weeks.