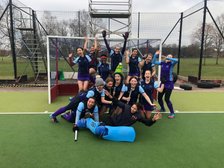 The Ladies 4s ended the season in a credible 4th place, having just been pipped to 3rd place by 1 point in the last game of the season. Bah humbug!!

The team has evolved very much from the start of the season. We have used a total of 27 players and 6 goalkeepers and every one of them has contributed to the fantastic team spirit and camaraderie the team exudes.

Little did I know when I appointed Sacha to be in charge of Man and Wally votes that she was a number crunching statistician supplying me with a detailed spreadsheet of all the facts and figures which made for very interesting reading …….if you’re an insomniac.

There were several players who scored consistently each week with MOM votes; Jozey Roman-Downs, Ki Hiscock, Sian Weston and Jo Bamford, but it was Sophie Lytle who just edged out Claudia Rohde and Emily Haarhoff to the top spot. Sophie was also voted ‘Players Player’ of the season, so hats off to her. ?

The most improved player went to Isla Kerr, but I’m now wondering whether wearing her crocs in ‘sports mode’ during the warm ups gave her an unfair advantage. ?

But there were no surprises at all for our Wally of the season, which went to Sacha for being unfashionably late on a weekly basis.

A big thank you to Coach Martin Jones for his enthusiasm and inspirational video clips he sends us.

Many thanks to all the parents who have come to support us and provided lifts to away games. Particular thanks to Andy, Mark and Simon for their taxi services. It must have felt like ferrying the girls from St Trinian's around, with ear defenders required, as the noise and shrieks of laughter coming from one car one particular Saturday was unbelievable!!

Can I also say a special thank you to Simon Hiscock who was tasked with looking after the balls for the season and not losing any. He far exceeded expectations by ending up with a very impressive 47!! He has now been bestowed with the title of ‘Honorary Ball Man’….for life! Well done Simon!!

All in all a very enjoyable season with a bunch of wonderful players.