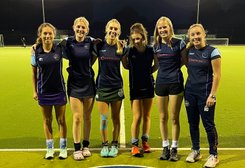 Congratulations to all of our players who have secured a place at Guildford's Talent Academy for this season.

Woking is also delighted to say the following players have been offered a place in Guildford's Future Stars Advanced programme - this runs alongside the Talent Academy programme - and involves another 50 players who have been recognised as having high potential.
Congratulations to Alice Clark, Emily Clapp, Jessica Eyles, Lauren Grice, Meghna Amin, Phoebe Hemsworth, Taylor Goodrich, Sam Baldwin and Oliver Rohde.

The talent pool at Woking is large, and our Coaching team and Junior Committee are proud to build on this success during the coming season. The team is also driven to continue to provide hockey for all abilities within a supportive environment.