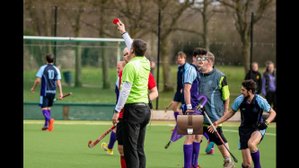 A game to remember

Rise of the Phoenix

Writing a match report is a tough gig, especially when you’ve been on a run of eight games without a win. That’s probably why there hasn’t been one written for the men’s 1s since before Christmas.

But a performance like Saturday's deserves a cheeky write-up because not only did we play extremely well, it also has a pretty significant impact on our season (assuming Covid-19 doesn’t wipe the rest of it out).

The maths was simple before the game. Win our last three games, and we stay up, regardless of what Slough do in their final two fixtures. Last time Woking played Southgate, we put in a pretty limp performance and went down 2-0, barely registering a shot on goal.

This time, would be different.

With Tim ‘Patient Zero’ Ming and Jimmy ‘Nine Fingers’ Furness returning to the side after extended absences, Woking fielded arguably their strongest squad of the season, but knew they would be up against a Southgate side who were still in contention to win the league and at worst, grab a playoff place.

Two teams, two very different causes, at the opposite ends of the league, with the same goal. Win.

It’s fair to say that Southgate had a few chances. Their penalty corner count was in the double digits, and they threatened to overwhelm Woking on any number of occasions in the first half. But the boys in blue defended like tigers (other large cats are available), marking tightly, and channeling players into positions where they could either shoot from unfavourable angles, or enter the Max ‘The Wall’ Deeley ‘Kill Zone’.

Woking’s own penalty corner routines have been somewhat lacking potency this season, so it may be surprising to the reader that this is exactly where their first goal came from. Not stopped cleanly at the top (classic), Woking had to improvise, and Cam ‘All Business’ Colloff, was on hand slip left to fire the ball into the mixer, and Rich ‘Gary’ Smith bundled the rebound over the line with the keeper prostrate.

Not content with their traditional one goal (prior to this weekend, goals per game stood at just 1.47), Woking had the audacity to put together a slick passing move that saw Craig ‘Busch Gardens’ Sutherland pick out Captain Tom ‘Everyone’s Second Favourite’ McLean, who sharply pivoted to dispatch the ball into the bottom corner.

Late drama at the end of the half meant Woking had to repel a string of penalty corners, Deeley kicking the final one to safety to bring the half-time whistle and high fives all round.

2-0, and the job half done, the second half would bring all the drama of an Eastenders Christmas Special to Goldsworth Park.

Southgate piled on the pressure early doors, and Woking were struggling to hold onto the ball, as aerials pit of defence just kept coming back at them. An injury to Mat ‘I Love You Jess’ Cockerham, gave coach Ryan 'Casserole’ Casson the opportunity to gather the troops and remind them that five minutes into the second half was a little too early to be playing for time.

Then completely against the run of play, it was 3-0. Andy ‘Old Man’ Pike intercepted a loose pass in the Southgate back line and Woking broke with numbers. Pike played the ball square to McLean who gave a cheeky reverse pass to Colloff, who put in Furness on the left of the circle. Everyone’s favourite dipstick calmly picked his spot and slapped the ball into the top of the backboard.

They say lightning never strikes in the same place twice. They also say that Woking never score two penalty corners in a game. Step up Kasper ‘Eurotrash’ Kuijpers, to send a wide drag flick into the goal via an errant Southgate foot. 4-0, but bizarrely, still plenty of time in the game left.

Southgate, apparently more concerned about goal difference than simply winning before the game, now had a pretty significant problem. They’d thrown the kitchen sink at Woking, but Ming, Robbie ‘By Proxy’ Faulkner, Tom ‘The Roman’ Leggett (Andy ‘No, we don’t know how he gets in the team either’ Barton was out of the game early in the second half with a dislocated shoulder) were making life extremely hard for them.

With their tactics of bitching and moaning at the umpires every five seconds not working, Southgate switched things up and resorted to outright violence. ‘Mad Dog’ - don’t know his real name, that’s what we were told his actual nickname was - not content with getting away with stamping on Cockerham’s head, then decided he wanted a piece of Steve ‘Factor 50’ Wilman, and got a yellow for his troubles.

Changing it up again, Southgate went back to chat, and having totally forgotten the umpteen penalty corners they were awarded, decided insinuating the umpires only blew one way was a good idea. Cue a second yellow in quick succession.

The game inevitably got scrappy, which suited Woking just fine, given the extent of their lead.

But ‘Mad Dog’ wasn’t done with this game just yet, and charged, straight out of the sin bin, and into the back of Sutherland, prompting a second yellow and a technical red.

Southgate protested. Not because they had any hope of salvaging the game, but because it turns out ‘Mad Dog’ was a 1s player, and due to play the next day on a 1st XI fixture. Fortunately for them, a technical red doesn’t result in a ban, but frankly, he should have seen straight red for the absolute filth that preceded either card.

And that was pretty much that - both teams had a few more chances, Will ‘The Future of England Hockey’ DiBiase continued to carve open Southgate’s midfield, and Southgate flashed narrowly over the Woking bar, but there was nothing further to trouble the scorers with.

With Slough thrashing Richmond 11-3, the significance of this victory can not be understated. With a game in hand, Woking are still very much alive and kicking. But only victory against Richmond next weekend will do.

After the match, Pike said “We know that we have been capable of winning games like this all season. Today it all just clicked. This win really does put it all back in our hands, but we need to ensure we go into next week without thinking we have already won.”

Ming added, “It was great to finally get a result that reflects the progress and development of the squad over the season. Hopefully we can build on this heading into the last couple of games. Hard work pays.”

McLean (I don’t think we’ve ever had so many quotes in a match report before) then said, “So many times this season we had missed out when putting in good performances, it was only a matter of time before we got the result we deserved. It's not over yet though, Richmond stand in our way next week.”

Also wanting in on the quote action, Barton concluded, “That performance is the result of the season. It gives us the chance to still escape the drop zone in the next two weeks. We've had so many near misses this season, so it was great to finally get it right for 70 minutes. Everyone was outstanding and played their part perfectly."

Make sure you can stick around afterwards as Ryan and Furness are playing in the same game, this can't go wrong. Who's going to get a card off Barton or Wilman first?

We are also on Bar duty so would be good if we could all stay for a few drinks afterwards.