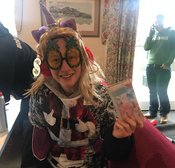 Woking started off with great energy and enthusiasm, during the warm up as well as at the start of the game. Woking had set themselves the following targets in an attempt to beat, league leaders, Marlow. Forwards had to execute the 3/4 press effectively, Midfielders had to communicate and pass the ball wide, and the Defence had to tackle outside the D. They were determined and tried their best to fulfill these targets.

In the first half Woking set up some great attacking play, with Nicholas passing some beautifully weighted wide balls to Smith and Cresswell. In the first half Burton-Brown worked hard to win a short corner which Woking were unlucky enough not to make count.

Marlow came at Woking with great speed and good first touches, allowing them to eliminate the Woking players. But Woking’s defense were up to the challenge, with Nannery making saves on the line, and Stone constantly keeping the opposition out Woking’s defensive D.

At half time Woking’s coach; Camps told the team the press was not consistent enough which was allowing Marlow to pass simple balls through them.

Woking came out determined in the second half with White winning a short corner. Unfortunately the ball went wide, and Woking missed one of their key opportunities to score. Marlow constantly came at Woking with skill, allowing them to create accurate shots on goal, luckily, keeper Derman made some outstanding saves which kept the score to 0-0.

Pepall was effective in channeling the opposing players, allowing her to make some great tackles along the right side of the pitch. Goldhawk beat Marlow with her skills, every time. Woking’s defensive line were solid throughout, successful saving all 7 of Marlow’s penalty corners. However, not all passes were accurate and this enabled Marlow to take a shot on goal in which they were lucky enough to score, resulting in the score 1-0 to Marlow.

Whilst the result is not what Woking wanted, there were many positives that the team will take when they face Trojans, next weekend.

Man of the match was awarded to Gemma, a solid defender who saved the team on many occasions, and saving many tackles on the line.