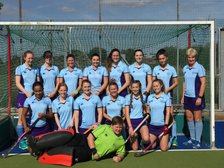 Hampstead & Westminster too hot to handle as Woking battle bravely

After a weeks break, Woking Ladies 1s were back in action, at home, against a team in excellent form; unbeaten in 4 matches - Hampstead and Westminster (H&W) Ls 2s.

The London side showed their intent almost instantly, winning a short corner within two minutes of the game starting. Woking supporters feared this could be a long afternoon, when the short was put away by Pisano. Woking were a goal down.

Undeterred Woking kept their heads, crisp passing between the midfield and forwards allowed Woking to penetrate H&W’s D, White took a shot but the keeper was equal to it.

Woking continued to press winning a short corner. Passing to the top of the D Nicholas was quick to move the ball right, Burton Brown tried her trademark sweep pass, but the ball was cleared off the line.

H&W started to respond. Their new signing; Tjaberinga, an extremely skilful player, started to pull the strings and won a short corner. The ball was played swiftly to the top of the D, switched right, Penrose slightly fumbled the pass, but it was enough to find it’s way through Derman, the keeper’s, legs.

Woking were clearly disappointed but weren’t going to give up without at the fight. This spirit was epitomised in the close of the first half. H&W won a short corner. In her eagerness to put pressure on the top striker, defender Stone broke early and was ordered up to the half way line by the referee. Woking were a defender down. The short was played again only for Woking to concede another one. The referee then blew his whistle signalling the first half time had been played, allowing the whole H & W side to come up and try and score from the short. It was 4 versus 11! Derman, Nicholas, Cashmore & Jolly defended a further 3 short corners battling against a resolute H&W team but Woking prevailed with some excellent saves by Derman and a clearance by Nicholas. The first half had finally ended.

At half time Coach Colin Huet alerted Woking to a few structural tweaks required. Woking actioned them and were on the attack from the off. Emes made an excellent run down the right and the team were in the D. A misplaced pass was capitalised on by H&W who demonstrated counter-attacking hockey to perfection. Within 30 seconds, the ball had moved from their defensive D to their attacking D, with Tjaberinga firing the goal in. Woking found themselves 3-0 down.