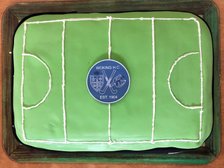 A Vital Win Away Against The Trojans

With only a handful of matches left to play this season and the team still languishing in last place in the league, Woking Ladies 1s came out fighting against mid-table Trojans in Southampton this weekend. In the pre-match team talk, coach Campling gave the team two aims:
1) Get a penalty corner in the first five minutes
2) Do not leave the pitch with less than a point
Not wanting to disappoint, the team did just that. With first centre pass going to Woking, the team made their winning intentions clear from the starting whistle by hammering the ball deep into the Trojans’ half and then pressing the ball in hard. Calmly keeping possession as a team, Emes seized the opportunity to drive down the right sideline, along the baseline and was taken down in the D by the Trojans’ defence, leading to the umpire awarding the first penalty corner of the game. Aim 1: ‘get a penalty corner in the first five minutes’ - accomplished.

Knowing that Trojans would expect a straight strike from the top of the D by Nicholas, Woking instead opted to inject the ball straight to Burton-Brown on the left, where she slapped the ball in at speed straight past the defence and keeper to give Woking an early 1-0 lead. With cries of ‘don’t worry, there’s lots of time left!’ from the Trojans’ bench, Woking then set about trying to maintain and extend their winning margin.

The remainder of the first half saw Woking play some of their best hockey, with Nicholas skilfully distributing the ball throughout the midfield and the forwards finding space with some well timed leading runs. Blythe, Pepall and White all created chances in the D, forcing the keeper to come out and slide tackle the ball away and out of danger. A panicked funny five minutes saw the Woking defence leap into action to scramble the ball clear and away from their D several times, with Derman also forced to make a couple of outstanding saves, but still the scored stayed 1-0.

Reminded at half time by Campling to keep calm, keep possession and not chase the opposition, Woking settled into their ¾ press and tried to keep the fired-up Trojans out. A lapse in concentration led to Trojans being awarded a penalty corner, which Nannery calmly saved off the line on the left post. Derman thwarted another Trojans attempt on goal with a one-on-one with a loose player on the left of the D, reacting with pace and sliding out to make the save so Cashmore could clear the ball away. Aware that they were close to securing a win, Woking struggled to keep the Trojans away and, with just two minutes left on the clock, Trojans were awarded another penalty corner after the umpire deemed Woking ‘not 5’ of a free hit outside the circle, leading to the upgrade.

A false start by one of the Trojans’ players on the edge of the D meant their first straight strike (which Nicholas got a stick to, sending the ball high over the goal) didn’t count, and so both teams had to re-set. Before they had a chance to re-take, the umpire blew the final whistle and so the Trojans arrived around the edge of the D en masse, with their captain calling ‘the ball does not leave the D Trojans!’ and Stone determinedly whispering on the baseline ‘oh yes it does…’. Trojans opted for another quick injection and a straight strike from the top of the D, hitting the ball just wide of the left post. Woking had done it – a well-deserved 1-0 victory and 3 points in the bag. Aim 2: ‘do not leave the pitch with less than a point’ – achieved, and overall ‘mission accomplished’ for a team now only one point away from climbing a spot in the league and ready to take on Oxford at home next weekend.