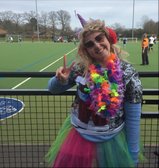 Oxford edge it in an exciting, rollercoaster game

With only 4 matches left to play, and the team now just 1 point away from relegation rivals, Havant, every game is now a ‘Cup Final’ game. Coach Campling spelt out just that in the pre-match team talk. She also warned that Oxford weren’t to be underestimated based on a string of recent good results against top table teams.

The game began and Oxford illustrated why they were such a threat. They looked sharper than Woking; passing swiftly, taking their free hits at pace. A neutral would be forgiven for thinking Oxford were the team in a relegation battle based on the urgency they displayed.

This speed and quick thinking was soon rewarded when Oxford won a short corner after 5 minutes. It came to the top of the D, where Kate Pugh connected with the ball, firing it into the top right corner.

Woking remained calm and continued to build, winning 2 short corners themselves. The first, a sweep from the left from Burton Brown, the second, a switch right and a drive by Blythe. But both shots matched by Oxford’s keeper.

At half time Campling gave a stirring team talk. She urged Woking to use the width of the pitch, attacking down the wings. Woking had 35 minutes to help save their season.

As soon as the second half began, Woking began playing. Some excellent distribution by Burton Brown started to bi-pass Oxford’s tightly protected middle of the pitch. Blythe was able to connect with one of those passes and used her skill to turn Oxford’s defence inside and out, successfully winning a short corner.

Nicholas shot, the keeper saved but Nicholas leapt on the rebound, rolled strong and shot again – this time finding the backboard. Woking were back to 1:1. Oxford looked stunned. Woking grouped at the restart and told each other to “go again”.

That’s exactly what they did, 1 minute later Woking were on the attack, again. This time Nicholas found herself on the right of the D, she shot, the keeper got a touch, but it dribbled across the line, much to Woking’s relief. 2-1.

At the re-start Woking told each other to keep things tight. Oxford had other ideas. Their quick passing returned, they broke into the D, a cross from Strickland found Pickervance who in turn found the backboard. Woking had held the lead for 3 minutes.

Woking were determined to hold onto the draw. Woking battled hard, Peppall, Jolly and Cashmore harried, Allcock and Howgate demonstrated great skill to keep applying pressure in attack. But Oxford had winning on their minds.

On 60 minutes they won a short corner which Baron dispatched. Woking were now 2-3 down. They kept fighting, trying to attack, but Oxford shut up shop and kept hold of the ball well until the final whistle.

Woking felt dejected but will continue the fight, after all, there are still 3 more games to go! As Emes messaged from abroad: "Don't Stop Believing"!