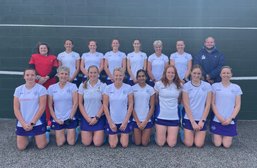 So on the day England lost the World Cup Final, Woking Ladies 2s decided losing was not going to happen again today!

Trekking half way across London, to a pitch without showers, on a freezing wet day, with the promise of teas that go down as some of the worst in the league, meant we couldn’t leave with zero points!!

After a great warm up, and an instructive team talk from coach TP, we should have got out of the traps hard…alas that wasn’t quite the case!

London Eds began attacking at pace and managed wave after wave of attacking play. Our defensive structure wasn’t quite gelling and our marking across the board left us a lot to focus on in training next week. Needless to say, after some sharp passing from London Eds they found themselves in the D, one-on one with the keeper. Keeper Cath (Rose) made an excellent diving save to smother the attack. She won the ball cleanly but after some deliberation the umpires decided otherwise and awarded a flick. Cath made an excellent save but alas the ball spun off her stick into the goal. Woking found themselves one nil down 

London Eds continued to attack and before we knew it another flick had been awarded. Going 2 nil down was not going to make it easy for us! We watched with apprehension, but Cath made another excellent save and successful kept the ball out, keeping the score at one – nil.

TP made some changes and in the second half Woking came out fighting. We started winning the 50:50 balls, playing some excellent passing play and keeping it much tighter in defence. Most of the second half saw Woking attack. We had several efforts on goal but couldn’t convert.

One of the attacking moves saw our top striker, Claire (Brouner), twist her knee and she sadly had to limp off the pitch! (We hope you make a speedy recovery Claire!!).

Woking didn’t give up. Poppy (Walters) got the ball on the halfway line, dribbled past around 3 players to make an excellent pass into the D. This smooth passage of play saw Cressy (Alice Cresswell) sweep the ball into the net. We’d got back to 1:1.

With around 5 minutes to go London Eds put us under pressure with a short corner but the defence held strong and repelled the attack, only to send the ball up the other end. Some excellent play by the forwards meant in the last minute we almost snatched the win…. but this time we had to settle for the draw.

Mission accomplished…we didn’t follow in England’s shoes and lose…. but we knew we had the frankfurters waiting!

MOM: Poppy and Gemma (Brydone)
WOM: Poppy for leaving the balls in the loo 