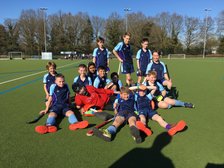 Still top of the table!

Woking U12s Aldershot & Farnham U12s - Won 13-1
This was the return match having played Aldershot & Farnham back in October on the wettest of days. The score line that day was 6-0 to Woking. In contrast yesterday was a lovely spring afternoon and the boys were raring to go.

In the pre match team talk I asked the boys to start quickly. This was an area that needed improving as recent matches had shown us that the opposition were out of the traps far quicker than us.

Period 1 started steadily and we had good possession in the opposition half. We were clearly the stronger team but they were holding fast and our execution in the D was lacking the killer punch. Eventually however, the pressure told and Daniel Q scored from close range to get us on our way. The period continued in much the same way and Daniel Q got another close range shot past their somewhat static goalkeeper to go 2-0 up at the end of period 1.

Period 2 started in similar vein and again we pressured well and a third goal came from Albie through the middle of the park. As we rotated our subs, we lost a little shape at the back and Aldershot started to press forward. Suddenly they were all over us and our backs failed to pick up their attackers, who flooded through us, to set up their first real chance which they scored from. Jack our GK could do nothing and the score was now 3-1. A couple of quick changes to bolster our defence and we were back on the offensive. Albie found himself on the edge of the D and with everyone looking for the pass, he shot from the edge and it went in. At the period end we were now 4-1 up.

Period 3 saw the opposition tire as the confidence grew in the Woking boys. Passing was more accurate and finishing around the D was more clinical. Sam B was moved upfront from midfield and was involved in a scramble in front of goal and somehow it went over the line. He admitted later that he tripped over his own feet and the ball bounced off his stick and over the line for the goal. I was barely having enough time to note the scorers down when Alec scored again to make the score line 6-1 and looking comfortable. Another cross from Alec was cleanly put in by Sam on the right post. The flood gates were now open and two goals from Albie and one each from Alec and Daniel Q and the score line was 11-1. In order to try and even things up we allowed Aldershot to have an extra player and took one of ours off. This only marginally worked and goals from Alec and Daniel Q again made the final score 13-1.

Well done the boys although there will be far greater tests to come.

Thanks again to Gihan for umpiring and to Phil Edwards for helping me manage the team.