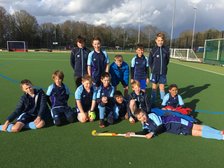 Woking started strongly and were soon on top of the opposition. They passed the ball around well and were pretty much camped in the attacking half. The goals started to come through, 1) Ollie H – a well taken rebound from a short corner shot, 2) Dan Q – stalking the left post yet again from an Albie cross and 3) Alec – a dribble into the D and then shot past the GK. Period 1 therefore ended 3-0 to Woking.

Period 2 started in similar vein and Alec scored another. Next was Dan Q with his trade mark close range shot (he’s not called ’The Fox in the Box’ for nothing – thanks Simon H for that nickname). Dan Q then scored again on the rebound from an Akhil shot at a short corner. 6-0 to the boys and they were brimming with confidence.

Period 3 was much the same although the odd lapse of concentration gave the opposition some hope of a score. Resolute at the back however were Max, Miguel (great to have you back), Akhil and Alec was also now doing his bit in the centre of defence. Woking still had chances upfront and two more goals from Albie sealed the 8-0 win.

Well done to all the boys and in particular those who I don’t mention who are the work horses of the midfield. A special mention also for Ollie H who took a nasty ball to the face a couple of minutes from the end. We are glad to hear you are doing ok.

Thanks again to Gihan for umpiring and to Jonathan Barlow who helped me with the substitutes.