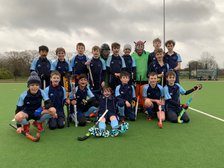 Another great result for the BU12s

This afternoon we played Winchester HC in the 11-a-side Hampshire league. This was our first match after Christmas, so we were all keen to get off on winning ways.

Period 1 was a fairly even affair and finished 0-0. Although Woking had more of the possession, the passing around the D was scrappy and we failed to execute the chances that did come our way. The short corners failed to deliver anything and highlighted that this is an area we need to work on.

Period 2 carried on where we left off and Woking still struggled to break the deadlock. As David and I glanced away and discussed the substitutions, we were disturbed by the cheering from the boys as they had actually scored a goal. It was somewhat scrappy, but the score by Felix was just what we needed. With our confidence on the up, goals by Dan Q and Ollie H followed and we finished the second period 3-0 up.

Before period 3 began, I gave the boys an objective to win 8-0 (that being the largest goal difference that can be registered in this league). With this in mind, we really needed to up our game still further. Woking started well and a goal by Joseph E set us going. As another Joseph E goal was followed by one from Albie, the target was looking a possibility. Winchester, however, were not giving up, and put some pressure on our goal. With a scrappy bit of play in front of goal, and our defenders all involved, it was left to Max to make a goal-line save. After some debate as to whether the ball had actually crossed the line, the Winchester umpire ruled it a ‘no goal’. A relieved set of Woking players continued to press forward and two more goals by Ollie H sealed the 8-0 win.

I felt this was a real team performance. The attacks down the right hand side were working really well by the end as Joe H passed to Daniel W, who passed to Sam B and on to Albie. Crosses came in and our attackers / midfield scored. I’d also like to mention both Max and Oliver S who both played well in defence as both had had little or no experience as a back. The score line may have flattered us but I was particularly pleased with the improvement we saw throughout the game. Energy levels were good to the end and as Winchester tired, we took full advantage of the extra space and passed the ball around beautifully. Well done all. We continue to keep pressure on the top table team Alton, with another convincing win.

Thanks again to Mark Rohde for umpiring, and to David Wright for helping me run the team.