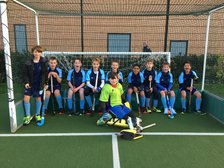 Woking U12 boys were pitched against teams from Teddington & Wimbledon in Pool A of the Teddington Xmas Tournament and first up were Teddington. Woking were unfortunate to start the match with no goalkeeper and Sam B stepped in as a kicking back to give us an extra outfielder. However, the lack of a goalkeeper seemed to put the boys off their stride and a mix-up in defence gave Teddington a clear strike on goal from which they scored. With heads somewhat down, the arrival of Haiden was not enough to rescue the game and despite some good pressure on the Teddington goal, and a number of short corners in our favour, Woking could not find the equalising goal. Final score therefore 1-0 to Teddington.

Next up was Wimbledon, likely to be the stronger of the two teams and as Woking needed to win to progress to the quarterfinal stage, they were up against it. Wimbledon had the bulk of the play from the off, and pinned Woking into their half. A couple of minutes in and Wimbledon found themselves clear in the D and a great strike put Wimbledon 1-0 up. Woking were being severely tested and were giving the opposition too much space around the D. "Marking" was the word too frequently being called out from the touchline. Clinical finishing in front of goal by Wimbledon, despite some good first time saves from Haiden, could not stop 3 further goals from being conceded. Final score 4-0 to Wimbledon.

We then played Richmond who had finished 3rd in Pool B. With nothing to lose we started well and pushed forward. Pressure in the D was good and after a bit of scrappy play we managed to get a shot on goal which was scored by Jack. Overall our passing was much better although Richmond also had some attacks eventually equalising. The rest of the game was end to end although no further goals were scored. A much better display by Woking but sadly still no win.

I know the boys will have been disappointed not to have won any of their games but much will have been learnt from the experience. I also hope they had had some fun along the way.

Will run until 16.30 depending on how far we get.
Broom Road, Teddington London United Kingdom TW11 9PJ