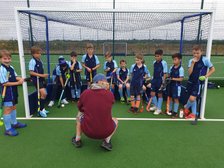 Off to a flying start!

A very good start to the season for our boys, who played very convincing hockey, although against quite an easy opposition. We reached 8-0 around 10 minutes into the second third, and at that point we allowed the opposition to line up 2 extra players, and we played only 10, taking our stronger/older players off the pitch at times.

The goalkeeper didn't touch a single ball and all the defensive players were very rarely tested, but when they were, they showed coolness and solidity, making the ball go round the back looking for space. Generally, attacking midfielders played with good speed and width and the forwards were ruthless in front of the goal. All in all, it was a very good performance, with all the boys showing confidence and trying to apply what they had learnt in training; during short corners, they organised themselves and tried some of the formations they experimented with on Friday, scoring a very good goal using the "Monkey" setup (Alec scored). Overall, what I liked most was the communication within the team, the way the boys passed the ball around and their attempts at playing in empty areas of the pitch; what they can improve is the speed in releasing the ball, and the precision when shooting or deflecting the ball toward goal.

Well done to all the boys, who, despite this being the first match of the season, really played well as a team today: I'm very proud of them! A special mention goes to those who played their first 11-a-side match: they have all shown a lot of confidence and made great use of space in the larger pitch.