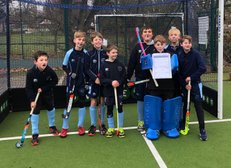 Purley v Woking (0 - 1):
On a very cold and windy day, Woking took the field against Purley with a couple of under 10s in the team (Adam and Will) playing down our left flank. Purley had a rather large U14 keeper in goal, but that didn’t stop a strong Woking side taking the lead with a wonder cross in from Alex and a nice shot and score from Adam on the left side.
Men of the match: Our under 10s Adam and Will

Cheam B v Woking (0 - 0):
A very tight game, some good saves by our keeper kept a clean sheet. Some really strong defensive play from Will E here really kept the attacks at bay (they had 7 outfield players and no keeper). Jack in centre of the park took several knocks on the foot and hand.
Men of the Match: Will E and Ollie

Cheam A v Woking (0 - 0):
Here we played 8 v 8, again a very tight match, and some excellent defensive play from both Ewan M and Will E kept the wave of attacks at bay. Our left flank looked particularly dangerous from both Will and Adam reacking havoc, but alas no goals.
Men of the match: Alex and Ewan.

Purley v Woking (0 - 1):
A really great game, end to end and Woking could and should have won by several goals, with the whole team playing awesomely well - again a great goal from Adam, but some awesome saves from Ollie in goal, Will E and Ewan M were great in defence, Will and Adam creating chances at will. Sam making life difficult for the oppositions defence, Alex constantly pushing up and causing problems at the back for the opposition (in fact hitting the post when scoring would have been easier) good work by Jack in the middle of the park.
Men of the match: The whole team - they did awesomely - extremely proud.

Cheam B v Woking (0 - 2):
Again Cheam had no keeper, but had 8 outfielders - we played with our entire team. Another awesome performance with gold again by Adam and our front man Sam with a fantastic shot from distance.
Man of the match: Adam and Sam

Cheam A v Woking (0 - 0):
The team here wanted to make sure of a clean sheet, some very strong play by Cheam setup a couple of shots, but an amazing defensive display from goalie Ollie and both Will E and Ewan M kept Cheam at bay. Woking ended the day undefeated and with 6 clean sheets from 6 an amazing tournament was had by all.
Would like to extend a huge thanks to Adam and Will from U10s who did amazingly and look forward to having you as part of the team in the future.

My thanks go to Simon Creeger for managing the team. Sounds like they had a very enjoyable festival. Angela

Please arrive at 11/11.15 as this is our change over time. Our juniors finish at 11, so too early and you won’t be able to park. Don’t park on the road either to avoid a parking fine - sorry. The clubhouse will be open for light refreshments.