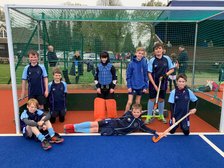 Great effort by all.

Two teams headed to Thames Ditton last Sunday to play their final festival of the season. With a number of players off on their holidays, we had a late call out to the U10s to find a second goalkeeper. Thanks therefore to Seb Duggan for stepping up and making some great saves during the afternoon. Here’s how the matches went.

Game 1 – v Old Cranleighans1: Won 2-0
A solid start from Woking as they had most of the game play. Execution in the D was less than perfect but a couple of quick fire goals from Albie gave Woking a winning start.

Game 2 – v Old Cranleighans2: Won 1-0
A tighter game than the first and OC2 had a few chances of their own. With Sam B now paying in the central CAM role, he managed to find space in the D and slotted the ball home for a 1-0 win.

Game 3 – v Old Cranleighans1: Drew 1-1
OC1 were now making a more competitive fight of it. A few holes were appearing for Woking and OC took their chance to score. Not to be outdone, Woking bounced back and scored a long range shot from Sam B. Best move of the day came from Sam’s run down the right wing, ending with a superb cross into the D. As I turned to look back at him he had face planted into the pitch. He tells me it was the quickest way to stop!

Game 4 – v Old Cranleighans2: Lost 1-2
Final game for the Wolves and our legs were beginning to tire. Marking in defence was becoming patchy as one OC1 player left their marker and ran in to score. A few minutes later and OC were attacking again and our brave but tired defence could do nothing to stop another goal. The Wolves hadn’t given up though and fought back through another Albie goal. As they pressed for an equaliser the final whistle went.

Well played everyone and my thanks go to Gihan for umpiring yet again and Andrew Paulson for managing the Woking Wasps.