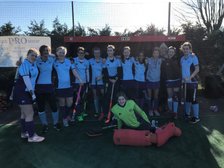 Bright sunshine greeted us at Ashford - a welcome sight after a backdrop of back and forth emails about whether the pitch would be fit to play!

The girls started in good spirits and set off on their warm up run behind the building (where I found them all stationary and huddled together nattering, saying 'you never follow us'! #busted). Conscious of last week, they were reminded how close the match was before Xmas (a 1-0 defeat - but a very close game) and how strong this Whirlwind's team is!

Ki won the toss and gained first push back and wow...a confident Whirlwind's team started to dominate play. It wasn't long before Gracie scored the first goal, after some great pace and passing from mid-field. The rest of the first half saw some gritty play between both sides and some solid interceptions by Ashford, especially through the centre line where they had a handy player (later voted MOM). After two short corners, Gracie scored a second goal before the half time whistle and the team hit the dug out in good spirits.

Team talk focused on shape and width - and it showed during the second half, with the mid-field especially helping the wings run down the line - one such run saw Gracie take the ball along the back line and set Eleanor up for a fantastic goal to take the score to 3-0. Ashford started to step things up and apply more pressure in our defending half! It was really encouraging to see our backs communicating more this week and encouraging each other to close gaps and Ashford's front line at bay. A huge defensive improvement!

The match ended on a tense attacking short corner as the whistle blew. Everyone shouted for all the girls to head into the attacking 25! Ashford managed to clear the ball, so the match closed, without another score. Fast, confident and a great match to watch!

Ashford showed great hospitality, inviting the team in for hot chips afterwards - it was great to hear the banter and see them all together (and something we must do at home matches with our great facilities!)

MOM (Oppo): Ella
Special mention: Amica for good leadership at the back.

The push back will likely be 11.15 as our colts finish training at 11am - we can provide a warm up area for you though.

There is plenty of parking next to the astro, with changing facilities and a club house with cafe. We can offer some hot chips after the match if you would like to stay

U14 Development League A