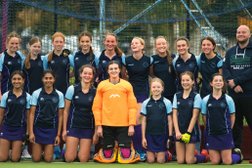 Spirits high after their first match victory, Woking showed no signs of fatigue when warming up for their 2nd match of the day. Epsom reemerged onto the pitch after their rest period and looked like a formidable opponent! Epsom started the stronger team. Great passing and positional play saw them push up into our half for most of the first 10mins with countless attacks and a couple of short corners. We defended these well and as always our courageous Clappie made many saves. Unfortunately after a lovely move from them the goal was to come for Epsom after 7mins and 56 seconds.
This gave our girls the chance to show what they are made of and they came back strong at the end of the first half with a couple of attacks resulting in short corners and a couple of shots on goal. Half time 1-0 to Epsom.
After a strong and stirring team talk from Martin and Mark the girls reemerged taking control at the start of the second half with a definite swing in momentum to favour Woking.
Our girls pushed up with some great attacks one nearly ending in a goal after a fabulous reverse hit on target from Claudia. Epsom were not to be out done however and yet again Clappie stepped up making two fabulous saves. Another attack from Woking and we were rewarded with a short corner. A good injection and then a supersonic strike from Carmen saw the ball hit the back of the net with the help of a deflection. A few nervous moments were to come as the umpires discussed whether the goal would stand. Sense prevailed and it was 1-1 after 9mins of the second half. Game on!!!!
The remaining 10 mins were to prove to be a very stressful time for all parents and concern was voiced over Martins blood pressure. But the girls held strong with some great defence work ( and a little help from the post). The whole team pulled together and they got the draw they richly deserved.
Full time 1-1. The girls should feel very proud of themselves over the two matches. They showed fabulous fitness levels and great teamwork and morale. Keep it up girls.
Epsom player of the match- Cara
Coaches player of the match- Carmen
Share via
FacebookTwitter
https://www.pitchero.com/clubs
Recent news