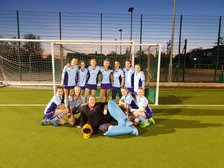 Away win for the Hurricanes

The Hurricanes travelled to Marlow for a late kick off. It was evident from the start that they were there to fight hard for every ball with Claudia using her long reach to make sure nothing got past her. With 90% of the possession in the first half this led to at least 7 attacks and shots on goal. It wasn't however until the 22 minute that the ball finally found the net thanks to a well worked attack and Katy Dickenson with a good shot that sailed past the goalie.
The little possession Marlow had they did however manage to secure two short corners which were well worked and if it wasn't for three wonderful saves by Clappie the score could have been different going into half time.
In the second half the girls came out fighting again with Emma literally throwing herself at the ball and keeper! Marlow did come out stronger but our midfield and defence kept closing them down and stopping many shots on goal and not giving away any short corners. Our attackers remained strong and this resulted in another 5 furious attacks and 4 short corners being awarded. Unfortunately their goalie proved to be an impenetrable force and we were denied the goal that we richly deserved.
A nervous few moments for the parents on the side line at the end but the girls maintained composure and saw the match out with a 1-0 win.
Well done to all for some great team work and determination. As always areas to work on so please get to training if possible.
Special congratulations to Clappie for getting Marlow's player of the match and to Elise for getting Martin and Iain's player of the match.
Keep up the good work and positive play girls!!!
Share via
FacebookTwitter
https://www.pitchero.com/clubs
Recent news