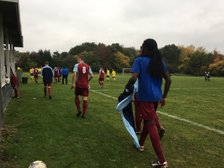 Woking and Horsell make it five games unbeaten with draw

Anthony Watson's men drew 3-3 against Shottermill & Haslemere despite finishing the match with ten men as striker Jack Melbourne was sent off for two bookings.

Following a successful week last weekend as Woking & Horsell drew with top of the table Royal Holloway Old Boys 1-1, it was how the lads reacted which really mattered.

Watson started with a 4,2,3,1 with Jack Melbourne leading the line, while Ross Allen started in goal.

It was a fairly even game, the diffrence was Noah Mcdonald, on his day he's one of the best, on Saturday he was brilliant. Two goals to his name during the course of the game set himself to have a good afternoon.

The ever reliable Dan Lewis got himself off the mark too with a fine finish.

However, with the game swinging in the balance the visitors were let back into the game and took full advantage of the mishaps of Melborune who was sent off for a 2nd yellow.

Man Of The Match - Luke Gurney

Anthony Watson spoke after the game and said, "Look we should be winning, but it's now five games in a row unbeaten and I like that."

"Next weekend it's the big derby and we want to win it, but we have to be focused and come together."

Watson was then asked about the sending off of Jack Melbourne which Watson replied, "He's let the team down, but I don't have to tell him that. He already knows. Jack will come back fitter and stronger and I'm 100% sure about that. We move on.

Woking and Horsell are back in action with the local derby next Saturday when they take on Knaphill Athletic - The last derby Knaphil.A were victorious when they won 3-2.