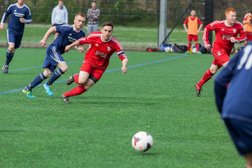 Club Captain Oli Cochrane (pictured) made his 100th WWFC appearance on Sunday. He debuted at the back end of 12/13 making two appearances and quickly became skipper prior to the 13/14 season.

His first few games were at right back in 13/14, but he soon moved forward to central midfield where he thrived; reaching double figures in both goals and assists. Since then he has played in every outfield position.

He won both Goal of the Season and Most Assists in 15/16, before leading us to our first League title in 17/18.

WWFC founder Matt Gibbins also passed a huge landmark; his 200th game as Manager. Gibbo's first spell in charge was in 08/09 where he took on a difficult job following our double promotion to Division 2. In our first season at this level Matt comfortably kept us in the Division with relegation never a threat.

He returned to the role in 11/12 where he strengthened the squad and lead us to our first ever cup final.

13/14's strong finish saw us promoted, at very late notice, to Division 1 for the 14/15 season. Although it was sometimes a tough season we finished midtable and have built on this every season since.

Title challenges followed in 15/16 and 16/17 before we finally broke our duck in 17/18 where a superb club record run of 10 straight league wins saw us lift silverware for the first time.