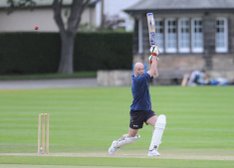 Williamson digs out win as Botanics succumb to Woodcutters

The Woodcutters recorded their second win of the summer with a dramatic last ball smash and grab against the Botanics at New Field.

There were four changes from the side that lost out narrowly to Inchcolm earlier in the month as the side looked to bounceback in the sunshine.

The Botanics were in early bloom with a Narayanasamy retiral in quick time as they turned the scoreboard over with steady pace. Banks, in the unusual position of being in opposition, was the first to fall.

Chowdrey’s unpredictability kept the veteran guessing as the ball kept lower than a sniper and it escaped under the bat before the alert Marlow swiped the bails off with gusto. Smith was up next to get in on the wickets followed by Bowie who bowled out young Andrew.

A wonderful moment at the end of the regulatory 20 overs when Bees Jnr was brought on to bowl against Narayanasamy Jnr for a ‘bonus over’.

Hill and Buchan opened for the Woodies and before long they were in a bit of trouble as 30-2 after just 6 overs. Hill and then Bowie succumbing to the Botanics bowlers.

This season would have been fitting to have Imodium on board as shirt sponsor as once again, the runs dried up as the Woodies struggled against some effective deliveries.

Bees clearly with one eye on the run-rate was offering Roy Keane levels of encouragement to Buchan in respect of seeking a return between the creases when the opportunity arose. Bees then breathed a sigh of relief when the was dropped and that was the catalyst to an unstoppable 26. Buchan then lost his wicket to Banks. The Woodies were now 80-3 after 16. Dare to dream?

Smith joined Marlow in the middle – surely the tallest partnership in town! Marlow opened up his sizeable frame to send some lovely strokes beyond the boundary, including a majestic six. Smith wasn’t as fortunate and despite some waving around of the bat, he failed to trouble the scoreboard and he was replaced by Williamson.

Woodies required 5 runs to win as they headed into the final over. Williamson despatched two of them with the opening delivery before Marlow was skittled, quickly followed to the pavilion by Patrick who earned a golden duck. Tiyagi was on a hat-trick ball for the over, the Woodies watching from beyond the boundary rooting for new batsman Neaves as he went out to battle.

A swing. A miss. Sod it – lets go. Remarkably, the scores were tied. Time for a hero? The field closed in on Williamson like Lions eyeing up Zebras across the Serengeti Plains. The batsman held his nerve and duly knocked the ball beyond the Botanical ring of defence to record what was beginning to look like the unlikeliest of victories.

A big thanks to our opponents for an exciting game, playing in fantastic spirit and with a couple of talented kids in their side.

Match photos can be found on our Facebook page