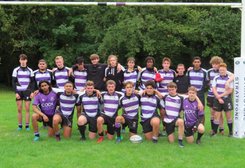 Another great performance from the lads as they worked extremely hard to secure another victory, this time over table topping Westcliff who had convincingly beaten us earlier in the season which shows us parents and coaches just how much the lads have progressed this season.

The game was a very tight affair from start to finish and in fact at half time the score was 0-0, a very rare occurence at this age group, in fact I think it was probably going in to half time with this score that won us the game as the majority of the half had been spent in our 22 soaking up wave after wave of Westcliff pressure, the lads dug in like you wouldn't believe and refused to give up any score and I think this might have broken the Westcliff spirit as the second half was to prove a very different 35 minutes of rugby.

Right from the off Woodford came out determined and were rewarded after 3 minutes of the restart with a try from Owen Morris as he rounded off a typical forwards smash and grab, converted by Lewis Walcott to take the score to 7-0. Lerwis then added a penalty a few minutes later to put us into double figures 10-0.

The game continued to to and fro but some breathing space was put between the teams when Rory Chick played a great 1-2 with Ben Acons from within our own half to add a second try to the Woodford tally, once again coolly slotted home by Lewis. The game could have been totally out of sight moments later but for a try saving tackle on Ben Acons after he broke through the middle only to be stopped 2 metres out with a bit of a high tackle which resulted in a penalty in our favour, from an acute angle Lewis Walcott continued with his 100% successful kicking ratio as the lead was moved to 20-0.

With ten minutes to go it looked all over but you can never discount the Westcliff lads as they rallied and scored 2 tries deep into the game to bring the score to a far more respectful (and fair) 20-14, but time was not on their side and the relief when the final whistle was heard was obvious to all.

A brilliant team performance from all the lads, they played like warriors and deserved the victory at the end of the day, some real outstanding performances especially from Ben Acons, Rory Chick & Guy Wales.

We now sit joint top of the league with Westcliff & Brentwood, the boys have really risen to the occasion this season and but for a narrow defeat at Brentwood after being in front less than a minute to go we would be clear at the top on our own, but no point worrying about that now, onwards and upwards.

Come on the Woods!!