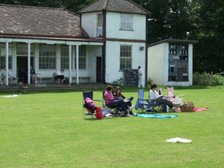 Built in 1922 in honour of the 56 Old Boys from Douai School who died during World War I.

Today the Pavilion is nearly derelict. Situated in the picturesque grounds of Douai Park, overlooked by Douai Abbey the sports ground is currently being used for Cricket, Football and Tennis and is used by a wide number of teams across all ages.
The ageing pavilion will be knocked down and rebuilt from the ground up. It is an ambitious project that will see the status of the war memorial preserved and will also serve an exciting new purpose.

It will include a private clubhouse which will house Douai School memorabilia and provide a focal point for old boys and the wider Douai Society.

This project links old and new. Facilities downstairs include changing rooms, a kitchen and club room. Critically, the design also features the upstairs "Douai Room" which will display plaques, photographs and shields - the memorabilia of Douai School.

The cost is in excess of £500,000. Woolhampton people have pledged £150,000 of which two thirds has already been promised. It is hoped the Douai extended community will match this. The upstairs room needs to be funded separately because grant giving bodies (which it's hoped will fund the surplus) will only finance sporting faciliites.

The project is led by locals who have established Douai Park Recreation Association (DPRA) as a charity and negotiated a 99yr lease from the Abbey, at a peppercorn rate.

What is Douai Pavilion to you? Somewhere to watch cricket and reminisce? Or resurrect Old Boy's matches? A glorious setting for a party? A place for children to experience the joys of football, cricket, tennis and other great British Sports? Perhaps the fields were your refuge?