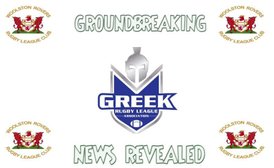 A conversation between Greek Rugby League Association (GRLA) President George Stilianos and Woolston Rovers Head Coach Mal Holt has led to a partnership that is set to benefit both organisations.

The partnership will see Greek domestic players given the chance to further their development at higher level in a traditional rugby league heartland with the club who are located in the town of Warrington. The Greek players will also be offered opportunities to gain coaching qualifications and experience while at Woolston. There is already a Greek connection at Warrington with national coach Steve Georgallis plying his trade as a player at the Wolves back in 2001.

Woolston competes in Division 2 of the National Conference League (NCL) while also fielding an open age side in the North West Mens League, an Under 18s side and 17 Junior teams.

The Woolston Rovers club has been a successful nursery for elite players coming through their Junior ranks including Irish International and current Salford Red Devils backrower, Tyrone McCarthy, as well as young back row or centre Connor Wrench who recently made his Super League debut for the Warrington Wolves. The club has established links with the Warrington and Salford Academies and Reserves.

Holt said, “Woolston Rovers will provide help on the logistical front and also offer spots in their team, giving Greek players valuable training and match experience. This is a groundbreaking opportunity, not only for Woolston Rovers, but also for British Amateur Rugby League to enter into a partnership with the Greek Rugby League Association. The vision of both organisations is to develop players from both sides that will enable them to progress their rugby careers, and also from the Greek point of view it will allow their players to gain an insight in how the game is played in the traditional British Rugby League heartlands. This will then allow them to return to Greece with experience and coaching qualifications that will enhance the game over there.”

Holt added, “Woolston and Greece will work very closely in the build up to the 2021 Rugby League World Cup and beyond to enable the game to flourish in the Greek league. “This is a great honour for Woolston Rovers, and we cannot wait to welcome the Greek players into the Green and Gold family.”

Stilianos said he was looking forward to the increased access to the development pathways that the Warrington based club will provide to the GRLA players and would welcome the Woolston Rovers coaching staff or players if they were to make the trip to Greece. “We are super excited about this partnership with Woolston Rovers and the solid pathway it provides to our players. Our track record of producing talented players is proven, as we recently had players playing in English League One and French Elite 2. We now have eight active men's teams in Greece, plus two more that are in the process of rebuilding, so our player pool is continuously growing. There are several players that are looking to test themselves at a higher level abroad and the NCL divisions are a perfect place for them to do just that.”

The Greece team to contest the 2021 Rugby League World Cup in October next year will
contain a minimum of eight domestic squad members.