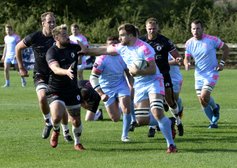 All even on Weston's, points shared!

Stourbridge snatch a draw with last kick of the game

Worcester must have thought they had won the encounter against Stourbridge Lions. 17-10 ahead after scoring with about 6 minutes left, only to have the visitors come back and score and get the draw with the last kick of the game.

Worcesters start to the day did not go well with Stourbridge showing skill and speed to score within minutes of the game starting, 7 - 0 after minutes.

That was the last time the visitors scored a try till the final minute of the game. That meant that Worcester did come back strong, and had lots of possession and increasing territorial dominance. Every player on the Worcester side were giving 100 %, it was just at crucial times the try line was to tempting to reach rather than play with heads up to challenge the strong tackling Stourbridge defenders.

With two very solid team performances in the last two weeks, the intensity of performance is being delivered, with this in mind it will be small tweaks that will help Worcester to get the score board moving and finish games with the score much more in their favour. Chris Griffiths is one player who knows his way to the try line this season, but Dan Jones was getting some top turnover ball, Olli Medows sured up the midfield, Jack Dutton operated well in the line out, Will Caroll made strong runs from the wing, Michael Serafini moved the ball away from set pieces, Pat McKleish was tireless around the field all game, lots of great bits of play from 1-18, but it all just needs to click to get our just reward.

With a visit to Hereford to look forward to next week, no time can be wasted dwelling on this result. Worcester will be fully focused and champing at the bit to continue improving and being very competitive till the final whistle.