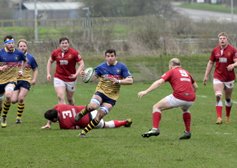 Man of the Match Dan Jones
Worcester 1st team were well beaten by an impressive Burton Team. The score line of 67 -24 tells the story. Burton were at one point scoring a point per minute of the game.
It was an off day for the traveling Worcester side. Head Coach Perks and assistant coach Pickared were left scratching at positives at the end of the game.
The game got off to a strong start for the Burton pack, with a very dominant scrum and a push over try. Instead of Worcester responding to the score, fullback Sam Harper forced a kick which was charged down and resulted in the second score within minutes of the first. The third unanswered score came from some good hands by the Burton back scoring in the left hand corner and it was 15- 0 in the 17th minute. By this time Burton were well and truly on a role.
To Worcesters credit things started to happen for them and possession was able to be retained long enough for winger Will Collins to make a quality break on the right, and 2 phases later Legend James Priddy used a burst of pace to score a try. By half time Burton had scored another two try's, one a push over the other a credit to the burton fullback.
Half time score was 29-5.
The half time talk had little effect as Burton scored 3 quick tries to be 48 - 5 and the game well out of Worcesters reach.
Anything out of the game would be welcome, and to Worcesters credit they persevered to get 4 tries and a bonus point. Dave Serafini got a 60 meter interception, Legend Priddy got a second try after a 40 meter run in and the 4th was from a very clever kick from Sam Harper to keep the ball in play and Alex Crawshaw drop on it over the line.
Something did not click on Saturday and all aspects of the preparation and performance will be looked at and addressed. 7 changes from the previous week did not give the continuity Worcester needed to build on what was an impressive win the week before.
The challenge of Rugby Lions will have to be met head on, no hiding from the Burton defeat. A man of the match performance by last years player of the year Dan Jones, was a highlight, his tireless work rate and tackle count deserved more.
Share via
FacebookTwitter
https://www.pitchero.com/clubs
Recent news