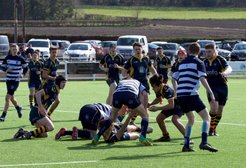 Glorious spring sunshine and Stourbridge’s 3G pitch provided ideal conditions for what proved to be a well contested semi-final between Stourbrige and Worcester’s Under 15’s.
Stourbridge kicked off the first half with a gentle but cold wind behind them. For the first 15 minutes Stourbridge were camped in Worcester’s half. Despite some fearsome defense Stourbridge were first to record a score with short range driving maul from a line out following.
Worcester were quick to respond, two long kicks from penalties saw Worcester visit the Stourbridge 22 for the first time. Ben Williams crashed over from the line out and Jacob Morgan-Iqbal kicked the extra two points giving Worcester the lead 5-7.
Brilliant driving by the Worcester forwards, led by Seb Dear, brought Worcester close enough for Jack Hodgson to power across line from short range. Very soon after, Alex Terry’s quick tap penalty caught the opposition off guard, seeing him dive over to score Worcester’s 3rd try, giving Worcester a 5-17 lead at half time.
The first 10 minutes of the second half some fearsome defending from both teams with Worcester’s George Cunliffe repeatedly driving the Stourbridge attack backwards. The Worcester backs worked the ball across the pitch creating space for Cam Richardson to race down the touchline and touchdown in corner.
The Worcester forwards set up their own driving maul from a 5-metre lineout to drive Josh Culpin over for Worcester’s 5th try. Not to be out done Stourbridge’s forwards drove over Worcester line again, this time from a free kick for their second try. The last play of game saw Alex Jones go on storming run down the blind side scoring in the corner. Worcester progressed to the final with score line of 10-32, which didn’t fully reflect the quality of the Stourbridge team and how close the game was for long periods of time. Worcester’s ability to turn visits to the opposition 22 into points proved to be the difference between the two teams.
Worcester Under 15’s progress to take on either Hereford or Old Hales in the cup final, which will be played on Sunday 28th April at Dudley Kingswinford RFC.