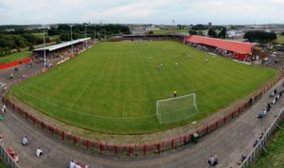 Borough Park has been the home of the Reds for over seventy years but, even before reaching that particular landmark, the stadium was earmarked for demolition to make way for re-development of the Derwent Valley.

Although the club and supporters wanted to remain at a re-developed Borough Park, the Council felt the best option was to re-locate Workington AFC to a new stadium - effectively a revamped Derwent Park - and groundshare with neighbours Workington Town RLFC. Although the rugby league club were very much in favour of the project, Reds felt keeping their own identity in vastly improved facilities - at a fraction of the cost - was the way forward for football in Workington.

The club are currently in negotiations with Allerdale Borough Council in order to obtain an extended ground lease that would allow the club to proceed with their plans to construct a new stand with associated modern facilities.

It is now a struggle to maintain an antiquated stadium but there is a determination to improve the facilities and meet the criteria required to progress whilst remaining in situ.

Historically, construction of the new Borough Park stand began in July 1937 but, some fifty years later, the structure was condemned as an indirect consequence of the Bradford City fire in 1985. The seating accommodation and roof were removed but the lower half of the building was retained to preserve the changing rooms, offices and Shankly Bar etc. Hence the strange shaped structure on the west side of the stadium.

The first competitive game to be played on the ground was actually a rugby league match between Cumberland and Lancashire but, on 25th September 1937, the first competitive football match took place when Reds' Reserves met Cleator Moor Celtic in a West Cumberland League fixture. A 2-2 draw was the outcome with Workington's first goal at Borough Park coming via the penalty spot and converted by Huddart.

The first team made their debut on the ground a couple of days later in a Cumberland County Championship match against Carlisle United and that game too resulted in a 2-2 draw.

On the 16th October 1937, the first North Eastern League game was staged with Reds inflicting a 5-0 defeat upon West Stanley with centre forward Fisher having the satisfaction of scoring the first Borough Park hat-trick. The attendance, incidentally, was 2,183 with gate receipts approximately £92.

Since those early days, Borough Park has hosted not only football but many other sports too including rugby league, cricket and even a 'superstars' competition. It has had other uses too being 'employed' as a helecopter landing pad and a film set.

The first FA Cup match on the ground saw Workington emerge 7-3 winners against Netherfield while the famous trophy was brought to the ground by holders Preston North End and paraded in front of the spectators in 1938.

During the early fifties, Reds and Workington Town RLFC groundshared and, remarkably, there was one occasion when they both played at Borough Park on the same day.

By then, Workington had already played their inaugural Football League fixture on the ground when an 11,000 plus crowd witnessed a victory against Chesterfield.

The first league 'derby' against Carlisle United attracted a 17,000 gate.

Floodlights were installed in 1957 with Hamilton Academical providing the opposition for the first game under lights. These were recently replaced with modern floodlights.

The record attendance at the stadium was set in 1958 when Manchester United came to town and a crowd of 21,000 (1,500 seated and the remainder squeezed onto the terraces) witnessed a Third Round FA Cup tie.

Nowadays, the capacity is a more modest 3,100 with the majority of the seating now situated opposite the old stand on the 'popular side' terrace.

Since the Football League era, the covered accommodation has been drastically reduced with the removal of the main stand and the Derwent End shelter.

Borough Park currently has a capacity of 3,101 of which 500 are seated in the grandstand on the 'popular side'.