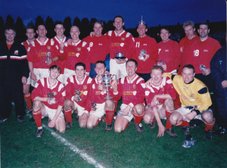 In the summer of 1995, Channel 4 contacted the Northern Premier League to establish who the ‘poorest’ teams in the league were .....

Goole Town and Mossley finished below us but Channel 4 chose to ‘adopt’ Workington as ‘their’ team for the 1995-96 season.

No one could believe it at first – why would a national TV channel want to become associated with a struggling team in the second tier of Northern Premier League football?

Channel 4 decided they would launch their sponsorship at Borough Park on 2nd August, 1995 – the same night that Reds played Carlisle United in a pre-season match which doubled up as Keith Glover’s Testimonial game.

Channel 4 sent a camera crew, as did BBC Look North and Border TV, with the former present to launch ‘The Big Breakfast’ deal and the latter two to pay tribute to Keith Glover.

The match finished 0-0 against a Carlisle side which included the likes of Tony Caig, Darren Edmondson, Derek Mountfield, Tony Hopper, Will Varty and Richard Prokas.

Footage and interviews appeared on all three channels the next day.
The playing squad (including manager Wayne Harrison and Keith Hunton) were invited down to London prior to the start of the season and appeared on the show at The Big Breakfast House near Bow, East London.

A crew next turned up at Borough Park on 26 August, 1995 when Reds met Hebburn in the FA Cup and their presence obviously worked in our favour as Workington won 8-1 (recording their best FA Cup win for 33 years) with George Corrie marking his debut in the competition by scoring a hat-trick.

The goals were showed on the programme on Monday morning.

Channel 4 returned to Borough Park in September for the FA Cup tie v. Spennymoor United and, once again, the goals were shown on the small screen as part of Monday’s show. The club were also invited to The Big Breakfast’s third anniversary party and four of the players were able to mix with the likes of Richard Branson, Frank Bruno and ‘Lily Savage’ at the London studio.

Initially, the exposure was superb but little was seen of their staff at Borough Park after the Spennymoor game.

We were mentioned in their sports bulletins on Friday and Monday for most of the season but received no ‘sponsorship’ fee as such.

The deal was publicity and early involvement in the show but no monetary donation.

The spin-offs could have been better but we were a bit slow to market a golden opportunity - in true Workington fashion I suppose!

Wearing The Big Breakfast logo on the Spall kit (red/white/red or all sky blue) for fifty six games earned the club nothing but publicity although reaching out to a few million people every week was a unique opportunity with the name Workington AFC being reinvented after years in the football wilderness.

Our league position improved during their association with the club – we moved up to 16th – and we did land a trophy that season albeit the Cumberland Cup!