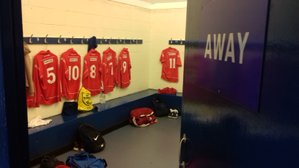 After the unscheduled break prompted by the Arctic weather ...

... Reds return to action on Tuesday as they take on Lancaster City in the Third Round of the Integro League Cup.

It will be a second visit to the Giant Axe this season following a 2-2 draw there in the league on Boxing Day.

Reds are keen to retain an interest in the competition, having never previously got beyond the semi-final stage. It represents a realistic chance of lifting silverware after the play-off bid hit the buffers with a five match losing streak. City, meanwhile, have reached the final on two previous occasions and lifted the attractive trophy seventeen years ago.

History favours the Dolly Blues in this competition, however, as, in five previous meetings, they have beaten Reds four times after we won the inaugural encounter twenty eight years ago.

Lee Andrews is again short of bodies with Dan Wordsworth likely to be missing because of a chest infection while Tom Fowler has been ruled out because of an ankle injury. They join Anthony Wright and Josh Calvert on the unavailable list.
Kick-off 7.45pm.