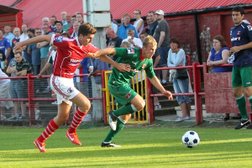 Kennedy, (inset - playing against Carlisle United), was previously with St. Mirren and Dumbarton. Last year he secured a place in the Nike Academy, a year long football academy based at Loughborough University. He has impressed in his five pre-season appearances.

Pacey midfielder Conway, based in West Yorkshire, joined Town as an Under-9 and was released following two seasons with Town’s Academy.

Reds manger Darren Edmondson still has to secure the services of a keeper. American Alex Wimmer has yet to sign and 'Edmo' may have to dip into the loan market for Saturday's opening league game at AFC Telford United.