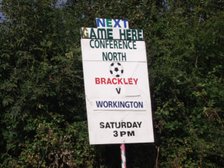 A little bit of history will be made at Brackley Town on Saturday (3pm) when a female referees Reds for the first time in Conference competition.

Sian Massey will be in charge of the game at St. James’ Park which sees the best defence in Skrill North hosting the league’s second worst attack.

Coventry official Sian is a familiar figure on our television screens regularly officiating in the Premier League as a very efficient assistant referee. It will be the second time a female has refereed a Workington first team fixture with the only previous occasion ten years ago at Alfreton Town during the Unibond League era.

Brackley, who won the corresponding fixture 3-1 last season, are currently in 4 th position having obtained 44 points from their twenty five games so far. Their only home defeat (1-2), to date, was against resurgent Barrow ten days ago with an impressive record including a 1-0 victory over Gillingham in the FA

Ian McDonald will rely on the same squad as last week hoping for better fortune than experienced at Gainsborough.