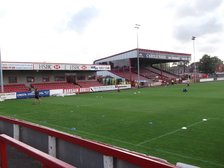 Reds are delighted to secure the signature of Steven Rigg on a non-contract basis ...

.. and the former Keswick, Penrith, Carlisle United and Queen of the South midfielder will make his debut at Altrincham tonight.

He joins us whilst remaining a part of the Chorley squad in order to gain some much needed game time, a deal which will benefit both clubs as the player returns from a long-term injury.

Keswick based Steven will welcome the opportunity to play competitive football to regain full match fitness as soon as possible. He will add some much needed quality to our depleted squad.

We thank Chorley for making this possible and look forward to Steven’s contribution in our forthcoming games.

Rigg’s arrival couldn’t have come at a better time with depleted Reds facing the league leaders at Moss Lane with unavailability again the main concern. Conor Tinnion and Sam Smith both have college commitments tonight and they join the injured trio of Phil McLuckie, Anthony Wright and Jordan Holt and forgotten man, Jack Ryan.

Alty are seven points clear at the top of the table and a massive twenty four points ahead of tenth placed Reds.

They will be thirsting for revenge following their 5-2 defeat at Borough Park back in September, one of only four losses incurred this season.