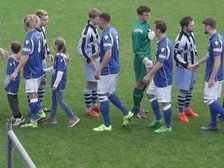 Either Reds or Matlock will travel to Moss Lane on Saturday week for the Fourth Round Qualifying tie.

Altrincham have a great Cup pedigree but are struggling in National North at the moment – a month into Jim Harvey’s tenure as manager.

Still plenty of work to do before contemplating the prospect of taking on Alty and, once again, Reds will have to shuffle the pack ahead of Tuesday’s second instalment against the Gladiators.

Josh Calvert will miss the tie while Scott Allison, who limped out of Saturday’s game, is a major doubt. James Earl will be able to play before his suspension starts at the weekend.

Phil McLuckie and Robbie Hebson, who both missed the 1-1 draw in Derbyshire, could return to the squad.

Coverage of the River Derwent ‘derby’ will be obtainable via the Live Scoreboard facility on the website with updates from John Walsh on BBC Radio Cumbria’s match night.