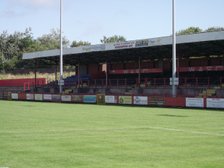 With no game to focus on this weekend, it might be an appropriate time to reflect and take stock of the current situation.

We obviously haven’t been good enough for the first five months of the season and find ourselves rooted to the foot of Skrill North.

At the moment, it looks as though six clubs have relegation concerns with, apart from ourselves, Stalybridge Celtic, Oxford City, Barrow, Gloucester City and Worcester City occupying lowly positions.
Of that sextet, only Barrow are in any sort of form and would appear capable of pulling clear as things stand. Just shows how a few wins can change your perspective.

Reds would need nine points with immediate effect just to get above the dotted line and without our rivals collecting points at the same time.
My head says it is an almost impossible task, my heart says it can be done if............

That is the problem, too many ‘ifs’.

New manager, Ian McDonald, has had a superb response from the players but only one point has been obtained from his six games in charge.

The theme now is to recruit ‘new’ players to replace those who haven't been good enough, and that is a time consuming exercise and even more of a gamble than recruiting players in the close season. At least then you can assess their strengths and weaknesses in pre-season games.

New players at this time of year are thrown in at the deep end, often without knowing their team mates, and it’s a case of sink or swim. That doesn't help the player and does little for the team.

So, the dilemma facing the manager is a case of stick or twist. Does he work with the under achieving squad he inherited or bring in players to freshen up a group low on morale and confidence.

Like everyone at the start of the season, I thought we would be adequate defensively but might struggle offensively. More often than not, though, we have encountered problems at both ends of the pitch.

In recent games, however, we have looked a threat as an attacking force but all the good work going forward is undone by schoolboy defending.

Joe Jackson has committed himself to the cause until the end of the season at least and that boosted morale on and off the pitch. The emergence of David Lynch in recent weeks has been another plus as has the form of Ben McKenna, Ross Wilson, Conor Tinnion, Stephen Hindmarch and Scott Allison all now getting to grips with football at this level.

They all found life difficult at first and, whilst they were finding their feet, our defence was, perhaps, working overtime to compensate.

The five stalwarts – Phil McLuckie, Lee Andrews, Dan Wordsworth, Kyle May and Anthony Wright – have not had the best five months of their Borough Park careers but still have much to offer if they see their immediate future in a red shirt.

Obviously, the goalkeeper situation needs addressed and, having being well served in that department for years, illustrates what a key position it is.

What is the best way forward then?

Do supporters want us to put all our eggs in one basket and do everything possible to salvage our Conference North status?

Or should we be planning for next season and putting together a squad now rather than scurrying around in late July/early August signing players who have failed to be fixed up elsewhere!

From a supporters point of view: is it better to struggle at the lower end of Conference North or would they prefer to follow a mid-table team in the Evo-Stik premier division as we get some solid foundations in place. We cannot keep building on quick sands.

We all have our thoughts on what should be done but, ultimately, it boils down to resources at your disposal.

Seeing Workington AFC compete and survive at the highest level possible is the one wish we all crave.