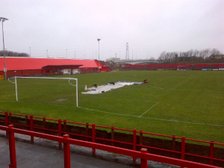 For the first time in living memory, Workington have had to call off a third successive home game because of a waterlogged pitch.

North Ferriby delayed their departure time because the local referee wasn't able to get to Borough Park until 12:30 but he confirmed the inevitable within minutes of his arrival after liaising with match referee, Peter Wright.

The two secretaries, Stephen Tather and Alec Graham, have agreed a new date for the fixture with the game rearranged for Tuesday 25th March.