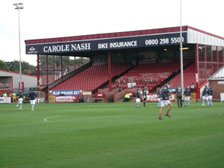 Whilst we have been idle since 25 January, Altrincham have managed to play three times but have dropped out of the play-off zone and are currently in seventh position. They won last time out, a comfortable 3-1 home success over Colwyn Bay, with top scorer, James Walshaw, helping himself to a well taken hat-trick.

Walshaw and co-sriker, Damian Reeves, have scored twenty seven league goals between them this term – the same number Reds have netted in total!

Ring-rusty Reds will name three debutants on the team sheet with Jonny Jamieson replacing the suspended Danijel Nizic in goal. It will be quite an experience for Jonny whose opposite number, Stuart Coburn, will be turning out for his 629th Altrincham appearance (if selected).

Alex Salmon and Ben Hoskin are also expected to feature but Gavin Skelton, like Nizic, will finally serve the one match suspension which, originally, would have seen them sit-out Reds’ game on 1st February.

Reds, who will wear their green and black outfit, have never lost a Conference North fixture at The J Davidson stadium (only two visits) but are well aware of the task ahead on this occasion.