If the match had kicked-off at 9pm, Reds would have left the Sir Tom Finney Stadium quite content with their night’s work.

But the damage had already been done by then and, after a poor first half and a sloppy start to the second, they found themselves three goals in arrears.

Yes, they did show some character in the last third of the game but a more respectable score line is of little consolation in view of what had gone before.

David Hewson made one change to the starting XI with Dan Wordsworth fast-tracked back into the side to replace the on-loan Jordan Holt. Sam Joel lined up against one of his former clubs while Brig included Michael Potts, who played a trial game for Reds five year ago.

On a pristine playing surface, Reds actually made a positive start and carved out two early chances.

A Matty Douglas assist found Brad Hubbold near the penalty spot but his low shot was pushed away by Bamber ‘keeper, Lloyd Rigby. Jason Walker’s clever lay-off then set-up an opportunity for Conor Tinnion whose fine shot just cleared the cross bar.

But gradually the home side took control and two goals in five minutes, aided by some poor defending, put them in the driving seat.

The breakthrough came after thirty three minutes. Macauley Wilson was allowed plenty of time to launch one of his trademark crosses into the danger area and, with red-shirted defenders conspicuous by their absence, Alistair Waddecar guided a free header beyond Aaran Taylor for the opener.

Taylor was unlucky when the second goal was hammered past him in the thirty seventh minute. He made a fine save pushing away a fierce cross-cum-shot from the right but the ball fell conveniently to Brig ‘skipper, Matt Lawlor, who volleyed home spectacularly.

Walker lobbed narrowly wide with a speculative attempt from thirty five yards and a Douglas header via a Hubbold corner was comfortably saved as Reds tried to find a way back.

That hope disappeared four minutes after the restart when Lawlor thumped home his second, this time with his left foot, with the defender again afforded all the space he needed.

Walker pulled a goal back on the hour mark with a clever dink over the advancing ‘keeper after Hubbold’s clever pass sliced open the home defence. 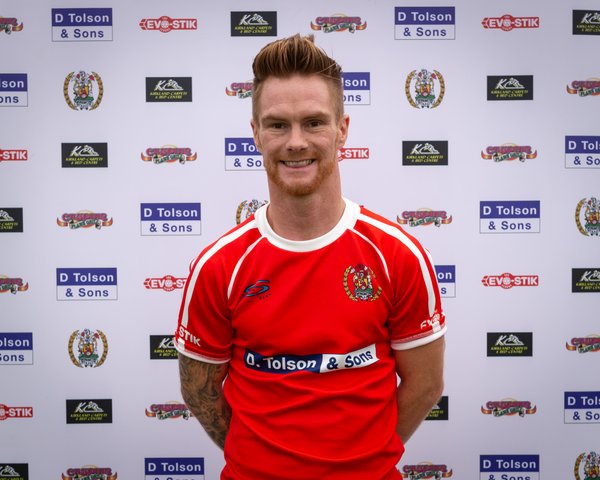 And Tinnion’s sublime assist created the opening for Walker’s second just before the final whistle to conclude an entertaining contest.

In between Walker’s quality strikes, Joel, Niall Cowperthwaite and Sheldon Mossop, twice, all had chances to open their goals account for the season whilst Brad Carsley could have added further misery to Reds out-of-sorts defence. A point-blank header was caught by Taylor and then the centre forward was through on goal only to be thwarted by a magnificent last-ditch tackle from Wordsworth.

A disappointed David Hewson gave an honest assessment on the shortcomings, “We have come away and haven’t played to our potential, haven’t been where I want us to be and where I expect us to be. We were too far off it, especially in the first half and they dominated large parts of the game.

“All credit goes to them as they were brighter and sharper in the first half and we were off the pace in every department.”