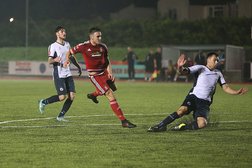 The visitors go into the game full of confidence having beaten Ryman Division One South league leaders Folkestone Invicta 1-0 on Saturday.

Speaking after Worthing beat Sussex rivals East Grinstead Town 5-2 on Saturday Piper admitted that Wanderers would provide a tough test for the Rebels.

He said: “Dorking got a good result against Folkestone so it’ll be a tough one but we’re the form side at the moment and we shouldn’t go into the game with any fear.”

Tuesday’s match was originally meant to be played back in September but was abandoned due to a floodlight failure.

The two sides were level at 1-1 when the match was called to a halt in the 38th minute after Brannon O’Neill had cancelled out Phil Page’s early strike.

Piper added: “We’ve seen what they can do for half an hour before the floodlights kicked in and they look like a useful side. We’ll have to be on our guard and at our best.

“They’re coming into the game off the back of a good result against the top side and they’re going to be very up for it so it should make for a good game.”

Lloyd Dawes (ankle) could return to the Worthing squad to face Dorking but Corey Heath will be suspended having picked up five yellow cards this season.

Zack Newton will join up with the Under-21s squad for their trip to Three Bridges as he looks to recover from a combined groin and hamstring injury.

The only other absentees are Matt Hurley (knee ligament) and Tony Nwachukwu (abdominal strain) who both have long-term injuries.

But with Littlehampton unable to meet Ryman League ground grading requirements Dorking were promoted instead.

Wanderers went eight games unbeaten at the start of this season before successive home defeats to Hastings United and Whyteleafe followed the abandoned match.

The Ryman League newcomers went on a bad run during October but have bounced back in their last two league games, beating Peacehaven & Telscombe (4-2) and Folkestone.

Entry for Tuesday’s game will be free for those who attended the abandoned match earlier in the season with the club making admission donation only. Kick-off is at 7:45pm.